With dynamic pricing, a ticket for next month might cost more tomorrow than today.
(Photo: © Prluey | Dreamstime.com)

Last month, Disney announced its move to a variable pricing model for one-day tickets, effective immediately. The new Disney seasonal pricing increases ticket prices during peak visitor times, like school holiday breaks and summer weekends, and sets lower prices during low-traffic times like weekdays during the school year. For instance, at Disneyland in Anaheim, Calif., regular tickets — most weekends and summer weekdays — are $105, off-season tickets are $95 and peak-demand tickets are $119. For the Magic Kingdom park at Disney World in Orlando, Fla., ticket prices range from $105 for low-traffic periods, $110 for regular demand and $124 for peak. Meanwhile, Universal Studios Hollywood announced a similar strategy in conjunction with their new “Wizarding World of Harry Potter.”

This new strategy opens up the market to more price-sensitive consumers on the lower end, and helps manage demand — effectively reducing crowds and time spent in lines — on the higher end. The change has received widespread media attention, with some publications posing a variation of the question “Has Disney Gone Too Far This Time?”

No, I would argue that Disney has not gone far enough.

While seasonal pricing is helpful, it typically doesn’t capture the full impact of managing extreme attendance swings and other business objectives that a true dynamic pricing strategy can achieve. By using an automated pricing algorithm, an attraction can realize more discrete and sustainable opportunities such as enhancing guest experience; growing revenue; and converting visitors into members or season pass holders.

We had this exact conversation with a client recently. For this client EVERY Saturday was a peak time! As we dove deeper into their data, however, we discovered that even on one of the busiest hours on the busiest day, attendance varied dramatically from week to week. This scenario illustrated the complexity of their challenge. In the end, the client realized that by limiting variation of prices to only three categories of Peak, Regular and Off-Peak times, not only were they leaving revenue on the table, but they were also not shaping demand well enough for their guests to have the best possible experience at their facility. 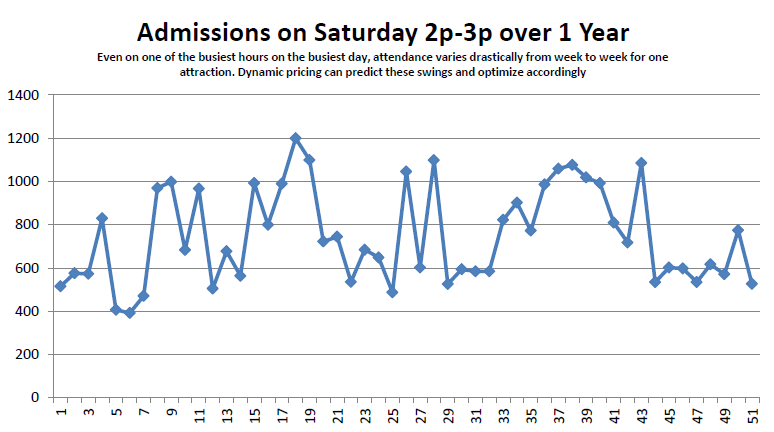 I don’t mean to suggest that a variable pricing strategy is the wrong strategy. By being the first major players to move in this direction both Disney and Universal have shown leadership, innovation, and courage. Using price as a lever to achieve business objectives is absolutely a move in the right direction.  In the first year of implementing variable pricing results may be strong; but what happens in the subsequent years? Using an automated, data-driven algorithm that learns over time, dynamic pricing can be the primary tool an attraction uses for ongoing and sustainable results.

A friend of mine told me “I hope Disney seasonal pricing works, because the last time we were there it was supposed to be the ‘slow’ time and it was much busier than we were expecting.” As Disney continues to evolve in how it manages demand to deliver world-class guest experiences, moving to algorithmic dynamic pricing would be a natural next step.